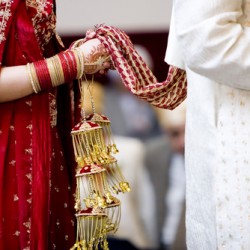 Types of Hindu marriages are described in Hindu mythology as eight types. Some of the marriages from among the eight types were practiced in ancient culture according to the sayings of Hinduism. Among the eight different types of marriages, all are not religiously sanctioned but it has been said that the people belonging to the ancient India were followers of these Hindu marriages. Marriage is commonly regarded as a process which helps to unite two individual souls and at the same time bring the two families close to each other. As per the Hindu philosophy, marriage is not just a process of coming together of the individuals but it is also a holy bond and a commitment which lasts a lifetime. Even the holy scriptures of the Vedas suggest that an individual should enter the phase of Grihasta after his or her student life. Thus, it can be said that marriage is almost a mandatory custom in the life of all the Hindus.

The Hindu religion is based on the eternal philosophy of the Vedas and this philosophy is well briefed in the six shastras and the Manu Smriti written by the rishis who were philosophers of the Vedas. They practiced Bahiranga Yoga, realised God and Veda mantras within their heart. Those ancient rishis were Atri, Manu, Kambadh, Patanjali, Vashishta, Matanga, Vyas Muni and divine beings like Lord Rama, Lord Krishna, Sita, Brahamcharini Gargi who was the guru of king Janaka and various other rishis and maharishis of ancient times.

Among all the philosophies which are still followed in India mainly by the Hindus, the institution of marriage occupies a very vital position. However, as per the eternal philosophy of the Vedas, there is a restriction on child marriage. The age of marriage for a boy is 25 years or more and that of a girl is 18 years or more. In the middle and present period however the custom of child marriage against Vedas was initiated. The reason behind it may be any but it has created a huge loss for entire humanity. In Manu Smriti shlok 3/21, eight types of marriages have been stated, but of eight the last two are prohibited.

Marriage is considered to be a religious ceremony by a Hindu. It is accompanied

by the holy yajna and the Veda mantras. The Vedic mantras are chanted in order to wish a happy life to the couple. The mantras instill a pious feeling into the hearts of the couple. The ritual of marriage is generally performed by a priest or the Brahmin. The concept of caste plays an important role in a Hindu marriage. Almost always a prospective groom or a bride is advised to marry within his or her own caste.

In earlier times, child marriage was a very common institution and it was practiced most frequently. Parents decided on the marriages of their children at a very early age. The prime concern of negotiating the marriage was to find out the compatibility between the two families. It was believed during those times that if two persons know each other right from childhood it is easier on their part to understand each other in a better way. Hence children were married off at a very tender age but the daughter stayed with her parents until she attained the age of puberty. But today child marriages are completely prohibited and not only that, children are also given scope to choose their own grooms or brides. Thus, we can say that the Hindu outlook towards marriage has widened its spectrum and has become much tolerant in nature in the course of time. As per Manu Smriti there are mainly eight types of marriages that are prevalent in the Hindu philosophy.

Brahma Marriage
Among all the eight types the Brahma form of marriage holds a supreme position and this system of marriage does not involve any system of dowry. Brahma Marriage takes place only after the completion of student hood of a boy and in this system the bride`s father ensures that the prospective groom has acquired the knowledge of the Vedas unfailingly.

Daiva Marriage
Daiva Marriage, on the other hand is regarded to be inferior to the Brahma marriage since in this system a woman has to look for her groom that in turn is considered a demeaning practice for a woman. In this form of Hindu Marriage the Hindu girl is married during a sacrifice to a priest. After waiting for a reasonable period to get a suitable man for their daughter when they fail to find anyone, the girl`s parents go looking for a groom in a place where a sacrifice is being conducted. During this marriage ceremony the girl is well groomed with ornaments and is surrendered to the priest who performs the sacrificial activities. 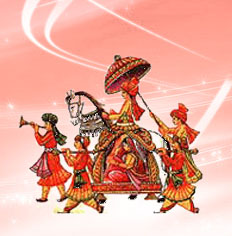 The word Arsha means Sage or Rishi in Sanskrit language and hence, Arsha Marriage suggests marriages with the sages or rishis. In this form of marriage the bride is exchanged for two cows received from the groom. This type of marriage took place because the parents of the bride couldn`t afford the expense of their daughter`s marriage at the right time according to the Brahma rite and therefore the girl is married to an old sage. As per shastras, noble marriages were far away from any form of business or monetary transactions and thus this form of marriage was not regarded noble.

Prajapatya Marriage
Unlike the Brahma form of marriage, kanyadan and any kind of monetary transactions do not form an important part in the Prajapatya Marriage. In this form there takes place the joint performance of sacred duties by a man and a woman. According to Swami Dayanand Saraswati, the founder of Arya Samaj, the father gives his daughter to the bridegroom, by addressing the couple with the mantras, `May both of you perform together your dharma.` This kind of marriage may be similar to that of the Brahma Vivah or Marriage, which may be the origin of Prajapatya Vivah but there are certain subtle differences for instance in the Brahma form of marriage the groom`s family sets out to seek a suitable bride for their son.

Gandharva Marriage
The Gandharva form of marriage is somewhat similar to the present day love marriage. Those couples who are not permitted by their families to get united seek refuge in this form of Hindu marriage. The Gandharva Marriage or the marriage of the celestials involves simple exchange of garlands upon which the sanctity of the marriage is confirmed. Reference to this type of marriages is found in a number of epics and mythological texts. This form of Hindu marriage reminds one of the love and romance between the mythological characters, Dushyanta and Shakuntala.

Asura Marriage
Asura Marriage on the other hand takes place when an unsuitable bridegroom approaches the family of the bride and offers as high price as he is able to afford to get married to the girl. It could thus be looked upon as a bribe for getting the girl the boy desires even if he is in no way a match for the girl. This system of marriage was not a much desirable form because it involved the commoditization of women.

Paishacha Marriage
The last and the eighth type of Hindu Marriages is the Paishacha Marriage. This type of marriage is considered the most inferior form of Hindu marriage and has been prohibited in the later ages. In this form of marriage, the girl is captured and is forced to marry even against her desires. Here, the wish or desire of the girl is not considered and the girl was even married to someone who she did not like. The groom`s family does not even present anything in cash or kind to the family of the bride. It was considered that men were permitted to marry those women in this form of marriage, whom they had seduced when the woman was intoxicated, asleep or insane. Thus, the Paishacha Marriage was later prohibited.