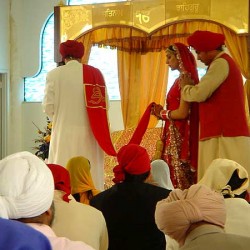 Sikh marriages are also quite elaborate and extend over a time period of one week. However, they are not as pompous and showy as Hinduweddings. Sikh marriage is very simple and adheres to the religiouspractices. It is held in Gurudwara in front o Guru Granth Sahib. The customs and rituals form an integral pat of the wadding ceremony. There are many rituals which take place one week in advance. The important Sikh wedding rituals are given below.

Pre Wedding Rituals
The first pre wedding ritual is the engagement or the Tilak ceremony. The bhaiji or the preacher of the Gurudwara recites hymns, offers a date to the groom and applies tilak on his forehead. After this ceremony gifts are exchanged between both the families. The next is the Chura ceremony, which is held at the bride’s place. Here, the maternal uncle or aunt of the bride gives red and white bangles to her for wearing. Silver and gold ornaments are tied to the bangles, called Kalirein. ‘Maiya’ is the custom wherein the bride and the groom are not allowed to leave their house for sometime before marriage.

The next ritual is Gana, wherein a red thread is tied on the right wrist of the groom and on the left wrist of the bride. This is considered to protect them from ill omen. Just few days before marriage, Vatna ceremonyis performed, in which vatna a scented powder made of barley flour, turmeric and mustard oil is applied to the couple. This is followed by a ceremonial bath. On the eve of the wedding, Mehendi ceremony is organized. In this, mehndi is applied on the hands and feet of the bride. Gharoli is another pre wedding ritual, wherein the water from Gurdwara is fetched in an earthen pot for the ritual bath of the groom.

Wedding Rituals
The wedding rituals are quite brief in Sikhs. On the main day, a flower veil is tied to the groom’s forehead, by his sisters. A currency garland also adorns his neck. This is followed by Milni ceremony, in which both the families meet at the bride’s place. They then attend the Gurudwara kirtan where shabads are sung and ardaas are recited. After this, the bride and the groom circle around the Guru Granth Sahib and seek blessings.

Post Wedding Rituals
After the wedding ceremony at the Gurudwara, the bride parts from her family. This is what the Vidaai ceremony is all about. The bride’s family bids her a tearful farewell as she throws back handful rice over her shoulders. This is followed by a reception party or grand feast organized by the groom’s family. This is organized in order to welcome the new member in the family and to formally introduce her to family and friends.