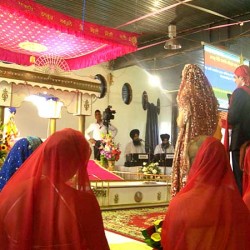 Punjabi marriages are known for their pomp and show. Just like the opulent culture of Punjab, Punjabi weddings are quite fun. They are conducted lavishly and celebrated with extreme gaiety. It is difficult to resist the fervor of these weddings as they comprise of traditional folk dances such as Bhangras and Giddas. To rejoice the special occasion like marriage, there are number of rituals, which are performed before and after the wedding. These rituals at times, seem to be just an excuse to celebrate and have fun.

Pre Wedding Rituals
The first ritual is the Roka ceremony which is conducted to secure the commitment from both the parties. It is a small function which basically involves exchange of sweets, gifts, dry fruits etc. The next ritual is Sagan which is either held at the groom’s house or in banquet hall. The father of the bride applies tilak on the groom’s forehead and offers him gifts and sweets. This is followed by Chunni Chadana, wherein the groom’s family visits the bride’s house. The groom’s sister or sister-in-law presents the girl with a sari. After this, the mother-in-law places a red chunni on her head and gives her jewelry.

After this, the bride is fed boiled rice and milk by the groom’s family and the couple exchanges rings. Few days before marriage, the Sangeet ceremony takes place, in which the female members of the family sing and dance to celebrate the occasion. Just before marriage, Mehandi ceremony takes place. In this, the sister and brother-in-law of the groom take mehndi to bride’s place. This mehandi is applied to the bride’s hands and feet. They also give dry fruits and dates, half of which are consumed by the bride and the other half by the groom.

Wedding Rituals
Before the wedding, the bride is given red and white bangles to wear by her maternal uncle. This is called the Chuda ceremony. In Ghara Ghardoli, the bride and the groom bathe with the water brought from the Gurudwara. On the main wedding day, a flower veil is tied on the groom’s forehead, after which he sits on the horse. These are called Sehrabandi & Ghodi Chadna rituals. On reaching the wedding venue, the bride and the groom exchange garlands. This is known as Varmala ceremony. After this, they are taken to the mandap, where the father of the bride performs Kanyadaan. This is followed by Mangalpheras in front of the sacred fire.

Post Wedding Rituals
After wedding, the bride leaves for her marital home and throws back handful of rice towards her parental house. This is known as the Vidaai ceremony. On reaching the groom’s house, the mother of the boy puts mustard oil on both the sides of the entrance door. Then she performs the traditional aarti and asks the newly wed couple to come inside and seek the blessings of the God. After this, a grand Reception party is thrown by the groom’s family. This is done to give a warm welcome to new couple.