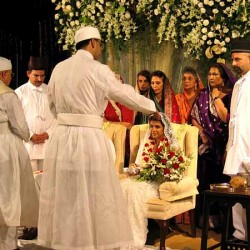 Parsi marriage is known as ‘Lagan’ and is conducted with great zeal and fervor. The customs and traditions observed in the Parsi marriage are quite different from the traditional Hindu marriage. This makes them a lot more fun and interesting. The rituals performed during the wedding are quite simple otherwise and provide full opportunity for enjoyment. However, like other regional marriages, Parsi marriages also have a number of rituals which extend over a week. Read on to know more.

Pre Wedding Rituals
The Parsi wedding rituals begin with Rupia Peravanu ceremony. This is the unofficial engagement between both the families. Ladies from groom’s family visit the bride’s house and gift her silver coins and shagun. This ceremony is repeated at the groom’s house as the bride’s family visits them. After this, Madhavsaro is observed. According to this, the families of the bride and the groom plant a tree in a pot individually. This pot is kept at the entrance of the houses and watered everyday till the eighth day after marriage and then planted somewhere else.

This is followed by the ritual of Adarni, wherein the groom’s family visits the bride’s place and gives her gifts like clothing and jewelry. The guests are treated with sev and dahi, boiled eggs and bananas. Just a day before the wedding Supra nu Murat ritual is performed. This ritual is similar to the haldi ceremony organized in Hindus. The groom and the bride are applied turmeric paste by five married women. Next is Nahan, in which the couple takes purifying bath after which they get ready for the wedding ceremony.

Wedding Rituals
For a Parsi wedding a stage is set in a baug or agiary, the Fire Temple. Here, before the groom steps on the stage, the bride’s mother performs a ritual called Achumichu. She holds a tray containing a raw egg, supari, rice, coconut, dates and water. She circles all these items, except water, seven times around the groom’s head and throws on the floor. The water is thrown on either side. This is repeated by the groom’s mother for the bride. This is followed by Ara Antar, in which the bride and the groom are seated facing each other, with a cloth in between.

After this, the priest circles the couple with a string, seven times. On the seventh round the couple is supposed to throw rice at each other from over the curtain. Whoever does it first, is supposed to rule the household. Now, the couple sits besides each other with the seven strands of string binding them. Oil lamps are lighted on each side and the priest begins prayer ceremony. This is followed by shower of rice and rose petals, after which the couple exchanges rings. This is called Chero Bandhvanu. Next is Haath Borvanu, in which the bride’s sister puts groom’s hand in a water glass, throws milk on his shoes and removes the seven strands binding the couple, in lieu of token money.

Post Wedding Rituals
Parsi weddings are renowned for their grand Reception party. It is an ideal opportunity to experience the culture, dance, music and food of the community, at its best. The dinner is lavish four course meal, comprising of all Parsi delicacies. The wedding comes to an end with the couple leaving for their home and the groom’s mother once again performs the achumichu ceremony at their arrival.