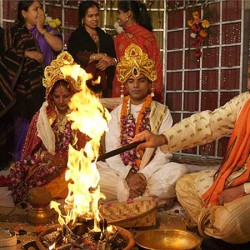 Oriya marriage is associated with the state of Orissa. The wedding ceremony and rituals bears resemblance with the Hindu marriageceremony but are certainly different in many aspects. Oriya people are not very showy and believe in simple living. This even reflects from the way their marriages are conducted. However, the interesting fact about an Oriya wedding remains that the mother of the groom does not take part in the ceremony. For more such facts, read on.

Pre Wedding Rituals
The wedding rituals begin with Jayee Anukolo ceremony, wherein invitation cards are distributed. After this, turmeric paste is applied on the bride’s body and given a holy bath, in a ritual called Mangan tradition. Diya Mangula puja is the next ritual, wherein the bride worships at Devi’s temple and offers bride’s bangles, sari, toe rings and sindoor. Once the groom arrives at the wedding venue with the procession, it is called Barajatri. Then the bride is informed about the same, after which she takes a ceremonial bath. This ritual is known as Baadua Pani Gadhua custom.

Post Wedding Rituals
Once the newly-wed couple reaches the groom’s place, they are given a warm welcome by his family. When the bride enters her marital home for the first time, it is known as the Grihapravesh. This is followed by the Astha Mangala custom. According to this ritual, the newly-wed couple visits the bride’s house, on the eighth day after marriage. Here, they are given a hearty welcome and treated with sumptuous food.