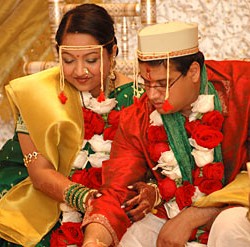 Maharashtrian marriage is perhaps the simplest and the least opulent in the whole country. Unlike other weddings, most of the rituals are preformed early in the morning. The Maharashtrian marriage procedure starts with finding a suitable counterpart. After this, the horoscope of the boy and the girl are matched by the purohits. After the horoscopes match, the mahurutfor the wedding is taken out. This is followed by the preparations for the marriage, with the wedding rituals being performed along side.

Pre Wedding Rituals
Sakhar Puda ceremony is the initial ritual which takes place in a Maharashtrain wedding. It can be termed as the engagement, wherein the bride is given a sari, and sweet or sugar, by the groom’s family. Next is the Kelvan ceremony, which is performed at both the bride’s and the groom’s house. It is a small puja of the kuldevta, followed by a meal. After this, the Haldi ceremony takes place, wherein turmeric paste is applied to both the bride and the groom. This is known as Halad Chadavane. This is followed by Simant puja, wherein, once the groom arrives at the bride’s place; her parents wash his feet and give him gifts.

Wedding Rituals
Antarpat is a silk shawl used to separate the bride and the groom. The maternal uncle of the bride brings her to the dias, where the mangalashtakas are recited. Then the shawl is removed and the couple sees each other for the first time and exchange garlands. At this moment they are showered with unbroken rice. After this, the couple asks their parents for permission to get married. This is called the Sankalp ceremony. After this, the bride’s parents perform the Kanyadaan ritual, wherein they offer their daughter to the groom.

After Kanyadaan, the groom ties mangalsutra around bride’s neck and applies vermillion in her hair parting. She in return applies a sandalwood tilak on his forehead. Next is the Vivah Homa, which is conducted by the groom in assistance with the priest. Following this is the Saptapadhi ritual, wherein the couple takes seven rounds around the sacred fire, taking seven vows. The wedding ceremony comes to an end with the Karmasampati ritual, wherein the bride’s father, the bride and the groom please Gods to bless the wedlock.

Post Wedding Rituals
Grihapravesh is the first ritual conducted after wedding. The groom’s mother welcomes the new couple and washes their feet with milk and water. After this the traditional aarti is performed and the bride is asked to enter the house byknocking down a glass of rice, kept at the entrance. The couple enters the house with their right foot. Last but not the least Reception party is organized, wherein sumptuous food is served for the guests.