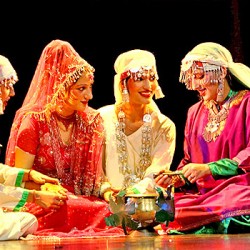 Kashmiri marriage, as the name suggests is the wedding ceremony celebrated in the valley of Kashmir. Just like the beautiful environs and the innocent natives of the place, Kashmiri wedding ceremonies are also quite simple and conducted in accordance with their own customs and rituals. The weddings cannot be called affluent but do have their own charm and luster. There are host or rituals observed before and after the Kashmirimarriage and thus make it a prolonged affair. Some important wedding rituals are given below.

Pre Wedding Rituals
The first ritual which takes place is Vanna or the engagement ceremony. The elders of both the families meet in a temple and exchange flowers to formalize the wedding alliance. Next is the Livun ritual, wherein the entire houses of both the bride and groom are cleaned. Just few days before the marriage, the Wanwun ritual is held, which is the musical session held at the house of the boy and the girl. This is followed by the Maanziraat ceremony, which begins with krool khanun.

It is the ritual in which the door of the houses of bride and groom are decorated. This is followed by the ceremonial bathing of the bride, in the beginning of which the maternal uncle of the bride washes her feet. Just two three days before wedding, the bride’s family sends 51 thaals to the groom’s house, which contains sweets, dru fruits, ghee, sugar and gota. Around two days before wedding, the groom’s family sends flower jewelry and tinsel for the bride, which serves as her first adornment.

Just one day before marriage, Mehndi is applied to bride’s hands and feet. On the wedding day morning, Diugun is performed, wherein the bride and the groom are applied a paste of curd, gram flour and saffron, followed by a bath. The bride’s parents also give her dijaru, an ear ornament, which is the sign of a marriage. The next ritual is Sanzvaru, in which the groom’s family sends cosmetics, mirror, sindoor and a betel leaf covered with gold or silver foil. After this the Duribat ritual takes place, in which the bride and the groom worship Lord Shiva and Goddess Parvati in their houses.

Wedding Rituals
The wedding procession is welcomed at the venue, wherein the fathers of the couple exchange nutmeg as symbol of eternal friendship. The bride and the groom are fed nabad and a dwar puja is conducted before going to the mandap for wedding ceremony. It is quite similar to the Hindu wedding and consists of seven pheras in front of the sacred fire, amidst mantras. After this the couple feeds each other with rice and finally the Vidai ceremony takes place, as per which the bride leaves for her marital home with her husband.

Post Wedding Rituals
On reaching the groom’s house, they are given nabad to eat and the mananmal, the thread tied on their heads are exchanged. Two pigeons are also freed to celebrate the occasion. Then they are led to the kitchen where they have food, fed by the aunt. The next ritual is Satraat, as per which the bride along with groom and some kids visits her parents house. Here, the couple is presented with gifts. Phirlath is the ritual wherein the couple visits the bride’s parents second time and once again they are given presents.

This is followed by Roth Khabar ritual which is held on a Saturday or Tuesday after the wedding. According to this ritual, the bride’s parents send, one meter long and two and a half meters wide cake, decorated with nuts, to the groom’s house. Usually an odd number of cakes are sent. Then the bride visits her parents with the person who brought the cakes. After this, the groom’s family sends somebody to fetch the bride back.