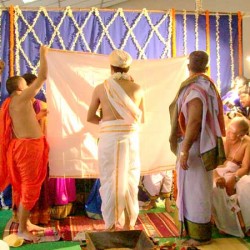 Kannada marriages are the weddings conducted in the state of Karnataka.In performance, Kannada marriage resembles the traditional Hindu marriage. However, the customs and traditions observed do differ according to the region they are practiced in. As a matter of act of fact there is not much difference and the rituals are simple. This provides ample opportunity to the families to enjoy the occasion. Given below are the wedding rituals of a Kannada wedding.

Pre Wedding Rituals
In Karnataka, the pre wedding rituals commence with Naandi custom. It is performed by both the bride and the groom in their houses. It is done to ensure the marriage takes place uninterruptedly. The next is Kaashi Yatre tradition. It is an interesting ritual, wherein the groom pretends of leaving for Kashi as he is devoid of a suitable bride. He only stops when his maternal uncle shows him the bride he has chosen for him. Just before the groom leaves for the bride’s village, all the items for marriage are placed in front of Lord anesha to seek his blessings. This is called Dev Karya ceremony. After this, both the bride and the groom are applied turmeric paste.

Wedding Rituals
On the wedding day the first ritual is Mandap puja, according to which the mandap and the hall where the wedding is to be conducted are purified. After this the bride’s father worships the groom by washing his feet. This is known as Var puja. This is followed by bride’s entry to the mandap. Here, they exchange garlands on the chant of holy mantras. Next is the Dhare Herdu custom, wherein the bride’s parents give away her daughter to the groom, by placing a coconut and betel over their hands and pouring holy water. Then the groom ties mangalsutra around bride’s neck. After this, Saptapadi ceremony is held and the couple takes seven rounds around the sacred fire.

Post Wedding Rituals
After the wedding, when the bride comes to her marital home, she is given a warm welcome by her in-laws. A vessel filled with rice is kept at the entrance of the house and she is asked to knock it inside the house, with her right foot. After this, the bride enters the house and this is called Griha Pravesh. After this is the name change ceremony, in which the groom decides a name for his wife. He then inscribes it with a ring on a plate, containing rice.

On the second day after marriage, the bride’s parents visit the newly wed couple. They then take the couple to their home along with themselves. The couple stays there for some days after which the groom’s family goes to the bride’s house to take them back. The Reception party concludes the wedding, which is organized in a banquet hall by the groom’s family. The main aim of this party is introduction of the bride, enjoyment, and relishing mouth wateringdelicacies.