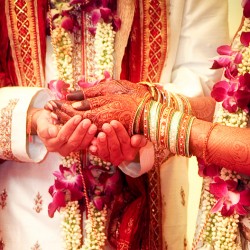 Gujaratis or the people of Gujarat are known for their rich, vibrant and colorful culture. Moreover, they are warm and cheerful, who are fond of celebrating festivals with fervor. This is quite evident in a Gujarati marriage as well. The wedding rituals in Gujarat are simple and filled with fun. The unique blend of traditions and ingenuousness is something which makesGujarati weddings a sheer delight. Given below is vital information onGujarati wedding rituals.

Pre Wedding Rituals
The pre wedding rituals begin Mangal Mahurat ceremony. It is performed by both the bride and the groom in their respective houses. Prayers are offered to Lord Ganesha to remove all obstacles. After matching the horoscopes of the couple, Griha Shanti puja is held. This is done by the priest at the houses of both the bride as well as the groom. The next ritual is known as ‘Jaan’ and it is performed to ward off any evil. It is quite interesting as the groom visits the bride place and touches his mother in law’s feet to seek blessings. While he does so, she tries to clutch his nose and he tries to escape.

Wedding Rituals
On the wedding day, the first ritual, which takes place, is the Jaimala, wherein the couple exchanges garlands twice. Next is the Madhuparka ritual in which groom’s feet are washed and he is given honey and milk to drink. During this the sisters of the bride try to steal the groom’s shoes, known as ‘Juta Churai’. One of the most important rituals on the wedding day is Kanyadaan, in which the bride’s father washes groom’s feet and gives him the hand of his daughter. This is followed by Hasta Milap, wherein the groom’s shawl is tied with bride’s saree.

The tying of the holy knot and the joined hands of the couple, signify their union. Rose petals and rice are showered upon them, during this time. After this, the couple takes rounds, around the scared fire, while the priest chants mantras. These are known as Mangalpheras. There are four pheras in Gujarati marriage. This is followed by Saptapadi, which are seven steps and vows taken by the couple together. Subsequently, they are blessed by their parents and elders.

Post Wedding Rituals
Reception is post wedding ritual, wherein all the near and dear ones give gifts to the couple. This is followed by the Vidaai ceremony, in which the bride is bid a tearful farewell by her family. On reaching the groom’s house, the bride is asked to knock down a vessel filled with rice, with her right foot, kept at the entrance. This ritual is known as Ghar Ni Lakshmi as the bride is considered form of Goddess Laxmi. Next is the fun filled ritual called Aeki Beki, which is awedding game played by the couple. A vessel is filed with water and colored by putting sindoor and milk. After this, everal coins and a ring are put in it. Both the bride and the groom are then asked to find it. Whoever, succeeds four out of seven times is deemed to rule the household.