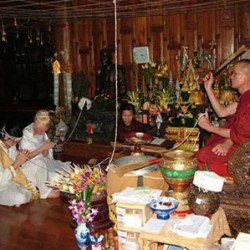 Pre Wedding Rituals
The first practice amongst Buddhists is horoscope matching. It is deemed quite important and is practiced with ardor. After matching the horoscopes of the prospective bride and groom, the boy’s family in consultation with the lama decides an auspicious date for putting the proposal of the wedding. The next ceremony is the Chessian Betrothal ceremony, wherein the maternal uncle of the bride is seated on a raised platform. The priest recites prayers and gives ‘madyan’, a holy drink to everybody. This is followed by fixing of the wedding date in consultation with the astrologer.

Wedding Rituals
The wedding ceremony usually takes place in a temple. Firstly, both the bride and the groom bow in front of Buddha image. After this, they recite certain prayers and chants and light incense sticks and candles in front of the image. Then the parents of the couple put a loop of strings on their heads to connect them. After this, the couple makes offering to the monks such as flowers, food, sweets and medicines. At times, token money is also given to the temple.

The priest then places a thread on the heads of the monks. Recitations in Pali language are made to evoke blessings for the newly wed couple. The string is connected to a container that is sanctified after the ceremony. Also, a red paste is applied on the foreheads of the bride and the groom. Though Buddhist weddings are not very formal but their form has changed significantly. Initially monks did not attend the weddings as they are present during the funeral rites. Nowadays, the role of the monks in weddings has become quite profound.