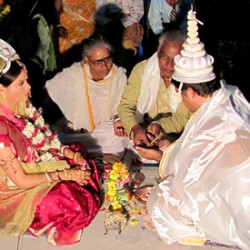 Bengali marriage ceremony takes place in the state of Bengal or between Bengali people. The wedding ceremonies in Bengal are quite long and elaborate. There are a number of rituals and ceremonies that take place during the wedding. The pre wedding and post wedding rituals provide ample opportunity to the loved ones to enjoy with each other. However, the traditional Bengali rituals are quite meaningful and interesting. To know more about Bengali wedding ceremony, read on.

Pre Wedding Rituals
Pre wedding rituals start with Vridhi Puja, which is done to rememeber the ancestors of the bride and the groom. This is followed by Dodhi Mangal ceremony, wherein ten married women bathe bride and groom. Later they are fed delectable traditional food. After this, the couple is seated on wedding Piris and both the families exchange gifts. Next is the Gae Halud Tattva ritual, in which the bride is sent gifts by her in laws.

The next is the Snan ritual, in which married women apply turmeric and oil to the couple. After bathing and wearing new clothes, the bride wears the Sankha Poranas. She is then ornamented with jewelry and crown along with sandalwood paste on the face. After this, is finally taken to the mandap, which is made using two banana trees and ornamented with fresh flowers and lights. A rice powder Rangoli is also made nearby.

Wedding Rituals
The wedding day rituals begin with welcoming the groom. An elderly female relative welcomes the groom with baran dala. It is a plate which is first touched to the forehead of the groom, then touched to the ground and then again touched to his forehead. After this, the groom is given sweets and sherbet. As he enters the house, rose water is sprinkled over him. The next is the Shubho Drishti ritual, wherein the bride and the groom see each other for the first time.

This is followed by Mala Badal ceremony, wherein they exchange garlands. The most important rituals on he wedding day are Saat Paak, during which the bride is seated on a wooden plank and lifted by her brothers. Thereafter she is taken around the groom seven times, which signifies their union. In Sampradhan ritual the paternal and maternal uncles of the bride, give her away to the groom. After this, the Saptadi ritual takes place.

Post Wedding Rituals
After the wedding the Basar Ghar ceremony takes place, wherein the newly wed couple is treated warmly and served delicious food. On the next morning the Bashi Biye ritual takes place in which the groom applies vermilion on the bride’s forehead. After this, the Bidaai ceremony is held and the bride leaves with the groom for her mrital abode. The first ceremony at groom’s place is Bou Baran, which is a welcome ceremony for the bride. The bride submerges her feet in a plate containing lac dye and milk and enters the house, leaving imprints. The next is the Bou Bhat ceremony. It is held as the bride eats her first meal in her husband’s house.