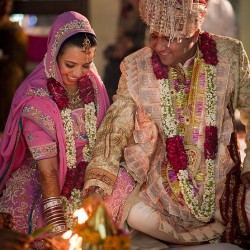 Ceremonies, festivals, rituals, customs whatever we call them, they have a certain characteristic of their own. Times might transform situations and eras pass by or civilizations alter; the attribute for celebration would never go away from the human race. More multifaceted the societies, more effervescent are ways to follow the events and that`s why Indian celebrations look so bright and vibrant.

Indian marriages display a wide mixture of customs supporting her ethnic and linguistic diversity. Though throughout, a lot of religious differences are seen on a lot of different levels, the institution of marriage is considered a necessity in following a philosophical responsibility towards the culture. If it`s believed that marriages are made in heaven, one would further accept it as a truth looking at Indian marriage ceremonies. Every rite we perform has certain significance towards a long lasting bond of relationships between individuals and families, rather between two souls. It is understood that marriage is the only acceptable mean to enter in a man-woman relationship to follow the duty of procreation and for spiritual growth.

Not only due to religious differences but also due to the regional distances we see a variety of customs within Indian marriages, however, there are three main stages to celebrating Indian marriages – pre Wedding rituals, Wedding day ceremonies and post wedding customs. These mainly include, decorating, performing actual marriage rituals and making the families and the bride and groom familiar with each other. Most of the pre wedding preparations and rituals like Mehendi, haldi take place at the respective homes. There would be a specially decorated venue for the wedding day functions where the actual wedding ceremonies would take place and then the post wedding rites are performed at the groom`s home.

These pre wedding preparations help in a number of ways, one is to deck up the bride step by step which includes a traditional beauty routine of applying turmeric paste to the bride, to have her take a bath with fragrant substances and applying hena on her hands and legs to deck her up for an important event in her life. Functions like these have an emotional feel. These would have all the relatives sit together and pamper the bride, have her feel the most important person in their lives. 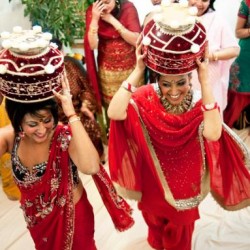 observed according to the region and religion the families belong to but also there are certain common rituals practiced in most of the castes if not religions. Previously these functions were performed in much simpler manners however, today the performance of these rituals are changed with time and also have got merged due to globalization.

Post marriage rituals sure play a very vital role is making the bride feel comfortable at the groom`s home, with his family. There are different games to keep the mood light hearted. Also a bride is accompanied by one of her family members for a few days at the groom`s home. This too is for helping the bride settle faster at her new home with her new family.

While marriage is a spiritual, holy ritual that is to be performed on an individual entering grihastha ashrama stage of his/her life, it is important that it is performed at the right time, precisely at the right minute as per the vedic science. Muhurat is the basic tool used in vedic science to choose the auspicious time. It is a moment in time when the conditions are as near perfect for performing every ritual in the marriage ceremony. This at times is also predicted / decided according to the horoscopes of the bride and the groom. It is believed that thought the destiny can not be changed; a relationship started at the best moment would always remain positive and long lasting, hence checking a right muhurat is considered to be one of the most important aspects in Indian marriages.

Indian culture has gone through huge changes as far as the social structure is concerned. This has had a direct effect on the family patterns and life styles. Due to industrialization more and more people are moving to newer places and carry their immediate families. This has directly resulted in mixed culture enabling the exchange of a lot of rituals and presentations in all the events including marriage ceremonies. Another huge shift in the marriage system has resulted due to mixed marriages and love marriages. Since individuals started going away to other areas to live and work and women also getting modern and working and going out to study, there were easier chances of meeting suitable and likeable alliances and after knowing each other well, decisions about getting married were taken. With more and more modernization happening, families too did not mind mix caste marriages though marriage among different religions is still not very common in India.

Getting married calls for a change in lifestyle and thought process of an individual. While in Indian marriages, the bride and the groom take seven steps together signifying nourishment, strength, prosperity, happiness, progeny and long life with harmony and understanding respectively, it also takes promises for a lot of other aspects in life. Though the times have changed, still in India pre marriage courting is not very common, hence the bride and the groom would not always get to know each other for a long time before getting married. It`s the Indian culture which teaches the bride and the groom to learn

`Love and Dedication` where love means accepting a person as he/she is and dedication is self sacrificing devotion with faith to enable oneself to accept the truth and remain positive with it.

`Sharing and caring` would contribute hugely towards a positive life. While, two people, fairly unknown, decide to come together with a thought of spending life together, it`s important that they share all the ideas, philosophies, secretes and care and respect it coming from each other.

`Trust and Responsibility` would be seen when a couple learns to trust each other completely and learn to take a responsibility of a decision taken in life.

In India, marriage is a sanskar which has defined human as a superior species over the others, which creates an everlasting relation and creates one family out of two. It is looked as a duty which benefits the Lord and the society. Marriage brings responsibilities and support and makes an individual feel complete with a complimenting energy always standing by. In fact, the marriage ceremony is one of the oldest customs of a human`s life and it is considered one of the most important events of one`s life. In India, the Kanyadana (literally meaning, donating a virgin) or giving away one`s daughter in marriage, was considered the greatest sacrifice a man could perform. Due to this culture in India, the marriage ceremony and of course the physical union of two human beings is elevated to spiritual dimensions.

Initially the marriage rituals and the custome were simpler in form and presentation, but with time it became complicated involving issues such as the dowry. Today, a marriage is perhaps the most important social occasion for any family, reflecting the regional color that overlays the basic Vedic rites. The customs during the wedding ceremony in India are varied and reflect the vast diversity of cultures of the land. The cultures have influenced each other with mutual borrowing of practices.