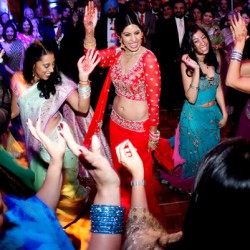 Indian Wedding is not only about serious rituals and customs rather it is also full of several fun filled rituals and frothy moments. Though people in India regard marriage more as a religious affair, the elements of fun and frolic are also added into it, to make this emotional affair, somewhat light and amusing. In fact, most of the pre-wedding rituals are designed in away that there is a scope of entertainment. Be it haldi, mehendi or sangeet, all the pre-wedding ceremonies are full of light and amusing moments; however among all the pre wedding celebrations sangeet party is the most enjoyable one.

The sangeet ceremony is also known as ‘gaun’. This custom heightens the excitement of wedding festivities. In the earlier days the custom of gaun used to last for ten days but with the passage of time, as people didn’t have more time to spend due to demanding work schedules, the custom has usually reduced to a one night function. At the bride’s home women relatives and friends play the dholki and sing suhaag, which is a traditional folk song. Songs include ‘jokes’ about the in-laws, and would be husband how to have a successful marriage like and songs about the bride leaving her parents home. Similarly the women at the groom’s home sing songs called ghoriya. Traditionally only the women celebrated this ceremony but nowadays the concept has changed as both men and women participate to celebrate this occasion.

In most of the families, the sangeet party is celebrated on an elaborate scale and is a very grand affair. However, in some families, it is also celebrated along with the mehendi function. It is generally done to save time. The sangeet party may be celebrated both as a separate or a joint event in both the families. However people generally prefer to make it a joint affair nowadays to make it more interesting and amusing. As a joint affair before the marriage ceremony, it also becomes a platform developing familiarity of the bride and groom with each others family.

Though sangeet function is an important pre-wedding function of all north Indian weddings, it is most popular trend among Gujaratis and Punjabis. Among the Gujaratis Garba dance is a favored alternative. They are mostly held in a big hall, which are beautifully decorated where people come dressed in ethnic Gujarati wear. The sangeet party mainly involves traditional dance, which is known as Garba, and dandia raas, which is dancing with sticks. The Raas Garba usually ends with a light supper for all those attending. In Punjabis, the Giddha nad Bhangra are the popular dance forms for the Sangeet night ceremony.