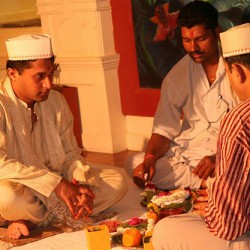 Indian wedding is a grand and elaborate affair. The wedding celebrations begin days before the actual wedding day and last weeks after that. In between the wedding day and the formal finalization of marriage, several pre-wedding celebrations  take place. These pre-wedding rituals  are actually traditional customs that are considered to be auspicious for the forth coming wedding as well as the married life of the would-be couple. They are also a way to mentally and emotionally prepare the bride, groom and their families for the marriage and develop familiarity between both the families involved. These pre-wedding rituals include several ceremonies like Roka, Sagaai, Saga, Sangeet and Tilak.

Among the pre wedding functions the ceremony of Tilak holds an important position. The Tilak ceremony is performed in most of the family according to their personal family tradition and culture. The ceremony is held in different styles according to different culture and caste. Mostly the ceremony is held at the groom’s residence or at any temple. In Sikh religion, the ceremony is performed by a preacher or bhaiji from the Gurudwara who first recites the hymn and after that offers the groom a date and applies the tilak or tika on his forehead, marking the engagement. That’s why it is known as a tilak ceremony. However, in most of the communities of Hindu religion, the Tilak is applied by the bride’s brother on the groom’s forehead.

In some caste it is called the Chenkai Ceremony. Traditionally, the bride and her mother do not attend this ceremony; mostly the male family members and relatives of the bride attend the function. In many families, the tilak and engagement ceremony  is celebrated together. Traditionally, the bride’s father looks after all the ceremonial activities. The ceremony of tilak brings together both the families where the elders of both the families. In fact, the actual motive behind its celebration is to enhance the bonding between the two families.