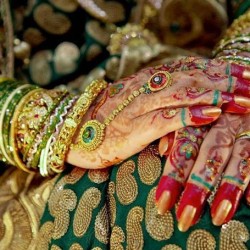 Weddings in India are considered to be a sacred and sanctified ritual. They are long ritualistic and elaborate affair with lots of pre-wedding, wedding, post wedding ritual. The occasion of Mehendi is one of the most important pre-wedding rituals. It is fun a filled ritual, which is celebrated mainly by the bride’s family. Different regions of the country celebrate the ritual in a different way according to their own marriage customs, rituals, and culture. The celebrations also depend on the wealth and status of the people. The bride’s family celebrates Mehendi party for gathering bride’s friends and relatives for blessing the bride as well as for amusement.

The ceremony is mostly held at bride’s place or sometimes in a banquet hall on the eve of the marriage ceremony or few days before the marriage. On this occasion a professional henna designer or some relative applies mehendi to the bride’s hands and feet. There are few places in India where it is a ritual that the first motif of henna or mehendi is applied by the bride’s sister-in-law whereas there are some places where the first mehendi motif is said to be auspicious if applied by bride’s mother.

The Mehendi or henna motif is not only the adoration of the bride rather it epitomizes her transformation from a virgin girl to a temptress for her husband. As per Kama Sutra, henna is one of the sixty four arts of women. Popular motifs of the bridal mehendi are conchshell, flowers, Kalash, peacock, doli and baraat patterns. The intricate motifs of the bridal henna also hide the husband’s name. It is said that the husband’s name in the intricate henna motifs is made for the groom who has to find out his name in his bride’s mehendi as an evidence of his sharp eyes and active brain to impress his girl.

Mehendi function is usually organized with the sangeet function. So, it has a festive feel to it with the women dancing and singing traditional songs on the mehendi ritual. The bride is dressed in light color clothes with light jewelry. According to the custom the bride must not step out of the house after the mehendi ritual until the wedding day. It is believed that the darker and deeper the henna stains the more the husband and the in-laws will love her bride. The ritual of mehendi signifies the strength and power of love in a marriage so it is regarded good omen for the would-be bride. It is said that the long the bride retains the mehendi, the more auspicious would be her future.