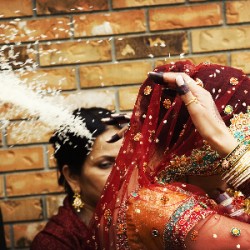 Hindu wedding also poses as the ideal time for family union and merriment. Relatives and friends flock the to-be bride and groom’s house, a week in advance of the wedding day. Singing traditional songs, dancing to the tunes of traditional music and Bollywood numbers, munching on delicious delicacies, preparing for the D-Day and performing all the pre wedding rituals encompass as the main activities that are practiced. A time of heightened excitement and enthusiasm, Hindu weddings signify the coming together of two souls for eternity. In a nutshell, Hindu weddings are all about tradition, culture, rituals and of course, enjoyment and cheerfulness!!

Vidaai In Indian Marriage
Amidst all fun and entertainment, marriage is one of the most emotional moments in Hindu marriage. Vidaai, a post wedding ritual, marks the end of the marriage ceremony.  It is a very emotional episode for everyone, when the bride seeks leave from her parents, family members, friends and relatives and goes to her husband’s home to start a new life with new dreams and hopes. It is a new beginning for her, as she bids farewell to her parents and goes to build a new life with her husband and his family. She leaves her parent’s home with tears of joy and sorrow – joy, because she is starting a new life and sorrow, because she has to leave her parents for it. The bride’s father gives her hand to her husband and tells him to take care and protect her loving daughter.

The ritual of vidaai is marked as one of the most emotional aspect of the wedding festivities. It is the formal departure of the bride from her parents’ home. However, just as we know that every ritual in a Hindu wedding has an element of fun to it. During the Vidaai ceremony, the sisters of the bride ask for money from the groom, for the shoes they had stolen, prior to when the wedding rituals started in the mandap. After much argument (in a good sense), the sisters are presented with either gold/silver ring or cash money. Thereafter, the bride finally takes steps ahead, leaving her house and embracing her friends and family members. According to the Hindu tradition, as the bride steps out of the house, she throws back five handfuls of rice over her head, in a way that it falls on the person standing behind her, as a symbol of prosperity and wealth.

The custom of throwing rice signifies that the bride is paying back or returning, whatever her parents have given her in all these years of her stay with them and wishes for prosperity to always flourish in the house she is leaving behind. Just when the bride and the groom sit in the car and its starts, the bride’s brothers and cousins pushes the car from behind, signifying that they have given her a push ahead to start a new life with her husband. After the last car starts, money is thrown on the road to discard the evil. Mostly younger sister accompanies the bride to her new home to give her moral support.