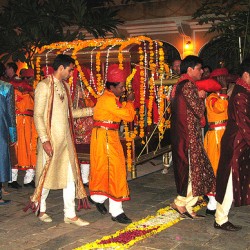 Marriage speaks of love, commitment, companionship and empathy. It is considered as an important landmark in one’s life. In Hindu custom, tradition wedding is celebrated for several days. It is mostly divided into three parts – pre wedding functions, main day functions and post wedding functions. The main day function is the actual wedding day, when the bride and the groom tie knots for eternity. This day includes functions such as reception of the baraat, var mala and mandap rituals and customs. After all the main day function has been performed, there are still some more rituals that are practiced after the wedding ceremony. These mostly comprise of rituals like the aashirvaad or blessing ceremony, vadaai or the bride’s departure, Pilucinchuanu are followed.

Mainly performed at the place of the wedding, rituals like aashirvaad or blessings are important post wedding customs, where the Brahmin blesses the bride and groom, after the completion of the wedding ceremony. The guests, who attend the wedding ceremony, shower flower petals and rice on the bride and groom as blessings. Vidaai ceremony is the farewell that the bride bids to her family and friends, before leaving for her husband’s place. Pilucinchuanu is a ritual, which concludes the wedding ceremony. Herein, the priest places a coconut in front of the car and waits for it to be broken by the wheel of the car, as the newly wedded couple heads for the temple to take the blessing. These are some of the rituals, which sum up the post wedding functions.

Vidaai Ceremony
Hindu wedding also poses as the ideal time for family union and merriment. Relatives and friends flock the to-be bride and groom’s house, a week in advance of the wedding day. Singing traditional songs, dancing to the tunes of traditional music and Bollywood numbers, munching on delicious delicacies, preparing for the D-Day and performing all the pre wedding rituals encompass as the main activities that are practiced. A time of heightened excitement and enthusiasm

Indian Wedding Reception
Indian wedding is one of the most extravagant affairs, marked by great pomp and gaiety. There is a riot of rituals and customs that are practiced in a Hindu wedding ceremony, which are not only practiced on the wedding day, but extend before and after the wedding rites. One such post wedding ceremony is the wedding reception party. India, being a land of diversity, is rich in culture and heritage.