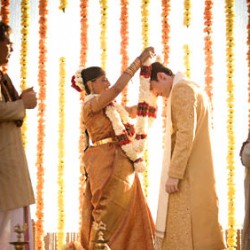 Indian wedding ceremonies today are a lavish affair, characterized with great pomp and gaiety, thanks to the infliction of commercialization. Right from lavish and stupendous Decor to sumptuous feasts and extravagant outfits and jewelry, weddings have become resplendent celebrations. However, the main essence of the festival, that is, the rituals and customs performed have managed to remain intact. The bride and the groom are mostly dressed in traditional Indian wear. While the bride wears ethnic Indian sari or lehenga and is adored with sparkling jewelry, the groom flaunts a traditional sherwani with a saffa or turban on his head.

Decription Of Var Mala
Talking about the wedding day functions, var mala or jai mala is one of most significant rituals that are performed. Var mala is a garland made out fresh flowers. Colorful and exotic looking, in the preset times, var mala is also made of artificial flowers. While the tradition of var mala is practiced in all the parts of India, the garland used varies from region to region. The var mala used in southern part of India is extremely heavy and long in size, as compared to ones used in North India. Red roses are the most picked choice for wedding garlands, though you can even go for orchids, carnations, and so on.

Var Mala Ceremony
Following the reception of the baraat, the groom is then taken to an elevated stage in the wedding place, where the var mala ritual is performed. While he is on the stage, the bride enters the wedding place escorted with her sisters and friends. She is then made to stand next to the bridegroom. It is here that the ritual of var mala is performed. The bride and the groom exchange their flower garland, by putting it around each other’s neck. Var mala carries an important significance and implies mutual acceptance of both the bride and the groom towards each other, as future husband and wife.

Var mala is one of the occasions, when fun and frolic completely dominates the wedding scene. Mostly, the male relatives of the groom lift him, so that the bride is not able to put the var mala around his neck. At this, the male members of the bride even lift the bride and the two groups try to dissuade each other. According to the traditions, the bride first put the garland around the neck of the groom. After her successful attempt, it is the turn of the groom to try his luck. The lifts are mainly done to bring in the element of fun. It adds a chuckle and smile on the face of both the bride and the groom.